Oil on canvas Circa 1920
Signed on the lower right

Two paintings presented in Paris in 1895, at the Salon des Artistes français, made him stand out favourably: "La rivière blanche à El Kantara" and "Nuit Algérienne". They were followed by "The Red River at El Kantara" at the 1896 Salon.
Antoine Gadan took part in the Universal Exhibition of 1900 where he was awarded a vermeil medal. His works can be found in the museums of Fine Arts of Algiers and Constantine

Recognised from then on as a landscape artist and decorator, Gadan was commissioned to paint the diorama intended for the decoration of the Algerian Pavilion at the Trocadero, during the Universal Exhibition of 1900. He chose to illustrate "The Algerian coast from Bône to Oran", a pretext to show the most beautiful sites of the Algerian shores in a real pictorial journey. This immense diorama, which was exhibited in London and New York after Paris, was a great success with the public, while earning the praise of the jury for its author, in particular that of the history painter Edouard Détaille and the landscape painter Jules Breton, a member of the Académie des beaux-arts.
When Léonce Bénédite, curator of the Musée du Luxembourg and president of the Société des peintres orientalistes français, offered the Société des artistes algériens et orientalistes a vermeil medal intended for the most deserving exhibitor at its Salon, Georges Rochegrosse and Albert Mulot, two of the most eminent members, decided to award it to Antoine Gadan
Maxime Noiré, the most prominent Algerian landscape painter, took him in total friendship, proclaimed "his high value" and took him with him at the beginning of 1908 for a "study trip to the oases of Biskra and El Kantara. Following this fruitful stay for the renewal of his inspiration, Gadan had the honour of an exhibition of fifteen paintings at the museum of Constantine, organised on the initiative of the curator M. Hinglais.
This splendid year of 1908 ended with a warm welcome at the Salon d'Automne in Algiers, where Gadan showed, among other things, his "Rivière d'El Kantara" "at the hour when the sun is rising: the river flows over the white pebbles, the light streams down, the almost blue palm trees and huge apricot trees bloom on the banks in a dazzling valley; the village of Toube looms on top of a red cliff, Chaouïa women come down to wash their clothes", to quote C. Monplessis also praises "Le chemin des dunes à Bône au printemps", "an intense poem of luminous life" in which "the amethyst-pink fluidity through which [Gadan] shows us the Bônoise dune" unfolds.
At that time, the champion of the Algerian East was at his peak, and the critic Frac could write:
"We were not wrong to predict a great success for the Gadan exhibition. It was even more successful than we had expected, since all the paintings, without exception, were taken away as soon as they were exhibited. Those who own them jealously keep in their homes these delightful works where harmonious nature shines, where the sense of truth is so exact, so personal, where, in a word, each corner is definitive. 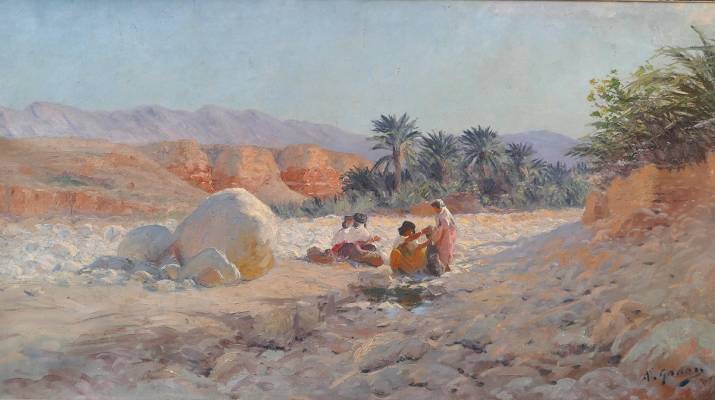