Fully original, movement in very good condition… this chronograph is a real collector (!)

In the early 1950’s, Breitling released their first pilot’s watch, the ref. 806. Featuring a slide rule chronograph, the model was called the “Navitimer." The slide rule was an important innovation for pilots, because it equipped them with the means to make important calculations mid-flight. While the Chronomat was the first Breitling model to feature a slide rule, the Navitimer--with its long association with the Aircraft Owners & Pilot's Association or AOPA--established Breitling's reputation as a watch company for pilots. The AOPA declared the Navitimer as their official timepiece.

1968 saw a completely new design of Navitimer, as the taste for larger watches dominated the industry. The resulting reference, the 0816, was given the affectionate nickname « Flying pizza." At an impressive 48mm, this was the first of the "big case" Navitimers, the second being its automatic successor the reference 1806 (referred to as the "fried egg").

Like previous Navitimers, the ref. 0816 contained the manually-wound Venus 178. The ref. 816 also had the potential to be a "left-wound" watch, hence the hole at 9 o'clock to accommodate the winding crown. Perhaps this modification was devised in order to outfit the watch with Breitling's new in-house caliber 11 movement (which the reference 1806 contained), but the ref. 816 ceased production after only ten years of availability, making it among one of the rarest models of Navitimer. 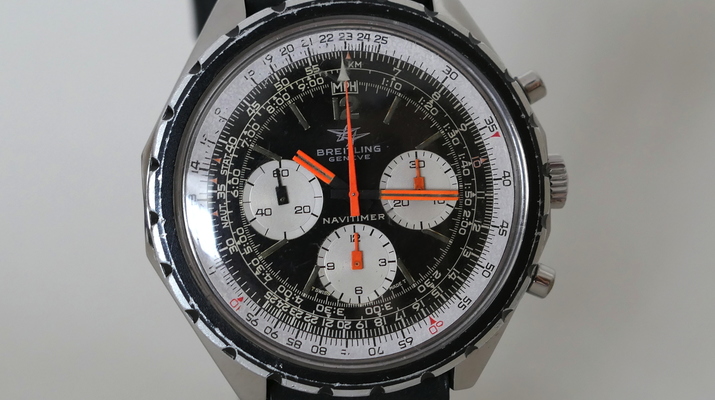 Other models of Breitling